An important reflection of any company is the clients they work with.

In this project list we have carefully selected one or more projects from our list of clients that not only reflects the type of projects that we have focused on, but also features the accomplishments of those we do business with.

This is an abbreviated list that we will build upon as time and resources allow. 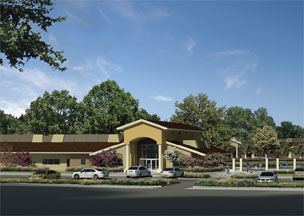 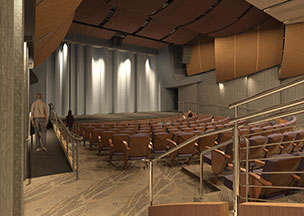 IBI Group Architects were commissioned with the task of a complete architectural and functional make-over of the Performing Arts Center at Bakersfield College. Intended to become a premier performing arts center for the region, the design task included the challenge of bringing the facility to a LEED Platinum level. With funding falling short of projections, the owner ultimately decided not to pursue LEED certification, yet every element to achieve the desired goal has been built into this project.
Items to note include: 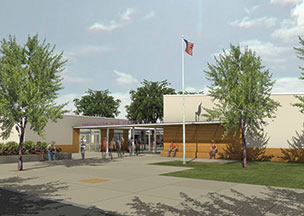 We worked with Cuningham Group in the development of the new Continuation High School for Kern High School District in Bakersfield. The project is unique with its modular structures, contemporary industrial feel, and sustainable design goals. This project was a challenge that required a modular concept to perform at a “green” level. Project features include high performance glazing with light shelves, high envelope thermal R-values, high performance lighting and variable refrigerant flow HVAC systems with dedicated outside air systems using heat recovery wheels. All of this had to be fit within the framework of an offsite built “module” that was installed in place over the field built foundation. The final result was a high performing school that was constructed under a tight budget, is truly high performing (25% T24 compliance margin), and is easily serviceable. 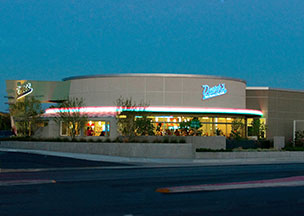 In our office we referred to this project as "the sweetest job in town". Skarphol Associates designed this new retail outlet for Dewar’s Candy shop. Dewar’s has more than 100 years of history in the city of Bakersfield and is universally loved by all. We were thrilled to be part of this project and to have an opportunity to be part of Bakersfield’s happiest place on earth. 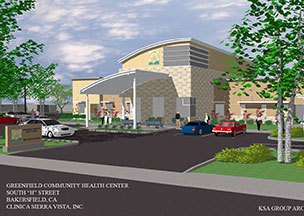 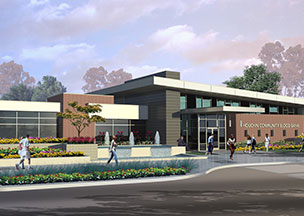 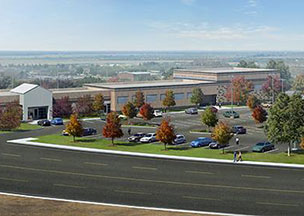 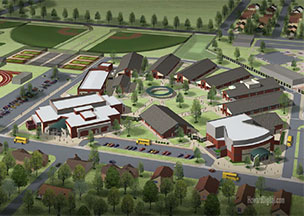 Ordiz Melby Architects were responsible for several new comprehensive High School facilities in the Kern County region within a ten year span. Independence High School was one of those facilities. The central plant included magnetic bearing centrifugal chillers, variable speed pumping, and chemical free water treatment systems. The classroom buildings featured a mechanical mezzanine that housed small air handlers to serve the classroom spaces. This allowed traditional and attractive pitched roof systems that saved on construction and maintenance costs. It also allowed for maintenance to occur without disrupting the classroom environment and provided a robust system with far more capacity than the traditional classroom unit ventilator, superior air distribution, and whisper quiet operation. The system was so well received that it became the prototypical system for Kern High School District. 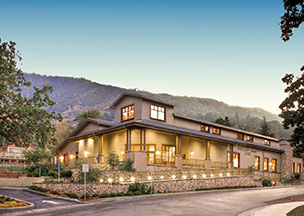 Charles Walton and Associates collaborated with KSA Group Architects to design this beautiful Craftsman style library for the community of Frazier Park. One of twenty-four branches in Kern County that service a population of more than 850,000, this library is seen by many as a crown jewel. A great deal of emphasis was placed on indoor environmental air quality in addition to sustainable design practices and energy efficiency.
Mechanical and plumbing features include:

North of the River Community Center 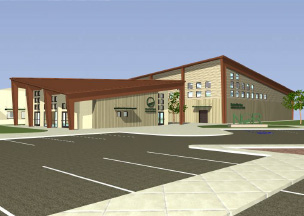 Ordiz Melby Architects designed this modern and inviting gymnasium, community center, and offices for the North of the River Parks & Recreation District. We designed in some details that played off the exposed steel structures. These included polished steel angle rings for closure collars as the exposed ductwork enters the space, steel wall brackets with chamfered round openings, and exposed ductwork joints were buttoned together using polished button head screws. 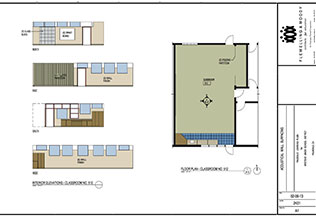 Flewelling & Moody Architects were tasked with converting an existing classroom into a learning environment for the hearing impaired. With sound attenuation requirements that would be challenging for new construction, the same standards applied to this retrofit. Applying carefully selected retrofit measures along with sound attenuating spring isolated AC unit curbs, duct silencers, and acoustically treated ductwork, the project was able to meet its goals. 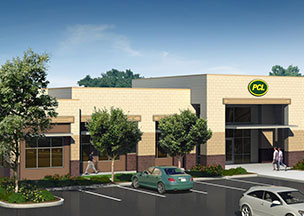 Colombo Construction collaborated with KSA Group Architects to design and build a LEED Gold certified office building for PCL Construction in Bakersfield. Known as Poole Construction in Canada, they are the largest construction company in Canada and the sixth largest in the United States. PCL required a project constructed and certified at the LEED gold level with a construction budget simply unheard of for a LEED certified project. This was accomplished with the project being built for an astounding $125/sq. ft. while obtaining a LEED Gold certificate. We not only provided the mechanical and plumbing engineering for this project, but also provided the documentation for the mechanical, plumbing, and IAQ credits with the US Green Building Council, and field commissioned the project as well. The energy model netted an ambitious goal of $0.16/month/sq. ft. energy costs. Along with field commissioning, we monitored and tracked energy use for an entire year. The final result netted a $0.13/month/sq. ft. energy cost. Compare this to other office buildings in Bakersfield operating at around $0.25 to $0.30 per month. 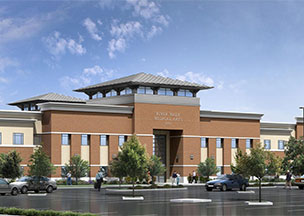 Riverwalk Medical Arts Building was designed by KSA Group for Castle & Cooke Development as a pilot project to market and sell portions of the building as an office condominium concept. This proposed a unique challenge in that we wanted to de-centralize the HVAC systems in order to remove the complexity and occasional controversy involved in assigning operation and maintenance costs to the multiple tenants.

The structure was designed in 2006 just as a new HVAC system was daylighting in the United States. The system was known as Variable Refrigerant Volume or Variable Refrigerant Flow and utilized modular rooftop units that offered a very efficient de-centralized system that could be designed, sized, and installed as the portions of the building were sold off, as long as the proper piping and ventilation infrastructure was designed and installed to accommodate a large range of potential tenant space sizes and uses.

With a fair amount of research and a decent sales pitch, we convinced all parties that this would be an excellent system to apply to the project in lieu of the traditional large rooftop VAV systems typical for these structures. This system has since become the prevalent standard in the Kern County area. Our firm is known through the industry as early adaptor of this now accepted system and we created many of the design standards that are used by others. 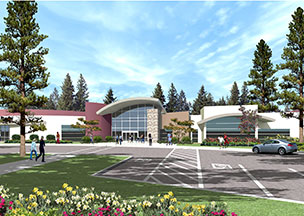 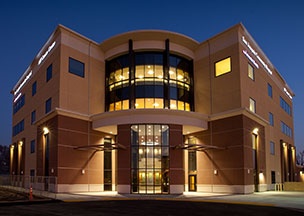 Swinerton Builders collaborated with IBI Group Architects in Bakersfield to design and build this multi-story medical office building and cancer center complete with linear accelerators on the ground floor, an ISO 7 clean room on the second floor, and an OSHPD surgical center located on the fourth floor. Baskin Mechanical Engineers provided the schematic design and bridging documents for Swinerton Builders to solicit mechanical design build bids.

The Offices at Riverwalk Building J

When Castle & Cooke Development chose Perkowitz+Ruth Architects to create a premier class A office building for their proposed headquarters in Bakersfield California, they directed P+R to work with us to accomplish their goals of superior energy efficiency, environmental comfort, and controlled first cost.

We had experience working directly with Castle & Cooke Development on more than one hundred thousand square feet of similar office space and had gained a reputation during that time that resulted in this design commission. The mechanical system utilized Daikin Variable Refrigerant Volume Heat Recovery heat pumps, ducted fan coils, and dedicated outside air systems using roof mounted energy recovery ventilators. The result was a building that modeled at 26% below requirements established by the California Energy Commission.

The Shops at Riverwalk Office Building 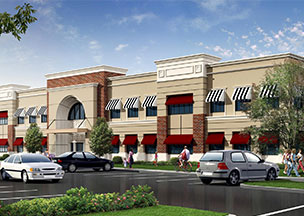 KSA Group Architects designed this office building for Castle & Cooke development for The Shops at Riverwalk development in Bakersfield. The building is LEED certified Silver Level. 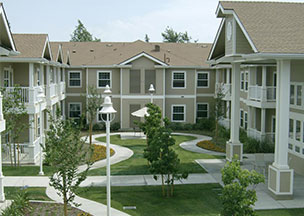 KSA Group Architects designed this efficient and modern facility for the Housing Authority of the County of Kern. Take a look at the plantation louvers in the courtyard view. These are filtered intakes for variable speed multi-zone heat pump systems that are located inside. The heat pumps are ducted to discharge air to louvers located around the corners from the louvers in the photo. With an operating sound pressure of around 60 dBA, the units are virtually invisible and imperceptible. The heat pumps are connected to indoor fan coil units through a series of refrigerant pipe runs. The project drew enough attention to be selected as a test site by Daikin, the largest HVAC systems manufacturer in the world, to site test a sophisticated controls system that uses local weather data to help control the variable refrigerant volume heat pumps. That was 2009. The controls system is now a standard option for the Dakin VRV heat pump systems. 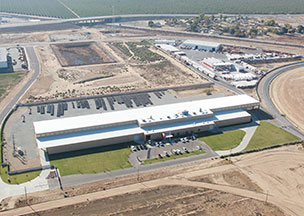 Wallace & Smith Contractors designed and built this modern industrial facility for Weatherford International. It required a strong collaborative effort of all parties to complete the project under a very tight schedule, within budget, while working with an international client. This required reviewing and interpreting facilities and design standards from other countries and applying them to the standards required by federal, state, and local jurisdictions, as well as being able to communicate with engineering staff from those remote sites. The results were a modern efficient facility that met the needs and expectations of the client.